If you keep a lid on a boiling pot of water, it will eventually explode. That appears to be what's happening at the Ann Arbor campus of the University of Michigan.

The UM Student Union has announced a protest march today beginning at 2:00 p.m. to publicly object to the school administration for they way the Brendan Gibbons Rape Scandal was processed. Everybody seems to want answers on how such a travesty could have transpired.

Tensions have been on the rise over this case since it was first reported by the Michigan Daily that football player Brendan Gibbons was allowed to stay in school and play for the UM football team after raping a fellow student-athlete in 2009. Gibbons was arrested on suspicion of rape, but never publicly identified or charged with the crime. When his football career was almost over, he was expelled.

This is the sort of story that's long-on-looks and short-on-facts, and students are demanding answers to a range of questions. The Michigan administration has generally stonewalled the public on this case, even banning the student newspaper from attending formal media events during the last month.

But just like the pot of boiling water, you can't keep a lid on things indefinitely without creating a blow-up. People just aren't as stupid as the power-brokers want them to be.

Take at look at this article, and especially the photo*, to get a taste of what the climate has been around the UM campus recently. 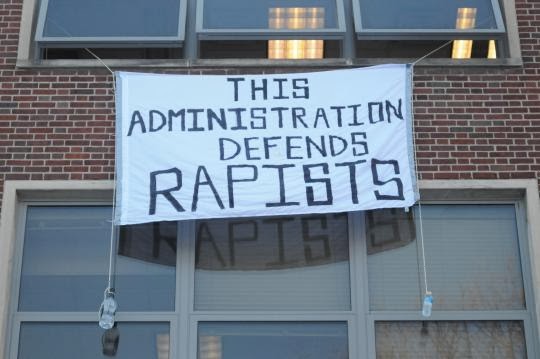 *This news item was submitted by a contributor
who lives in the Chicago-Land area.
You can follow him on Twitter
@Chicago60614.

----------
Tweet ****** Click on NO COMMENTS (or # comments) below to enter and view reader comments. ----- Remember to check Spartan Headline links, updated real time, in the left column of SpartanResource.com (Web version only). *****Note: If you are receiving this post via automated email, you need to go to the site to view headline links and embedded videos in this post: http://spartanresource.com/ (Web version only). SIGN UP TO RECEIVE POSTS VIA EMAIL, TWITTER OR FACEBOOK IN THE RIGHT COLUMN.*****
Post author: American Reporter at 12:33 PM