THIS IS STUFF ABOUT JIM HARBAUGH

Much has been made about the "Return of the King" in Ann Arbor, but not so much about the character of the man being handed the crown and sceptre. What about Jim Harbaugh as a player?

Maybe we should ask Mike Ditka. The legendary coach of the Chicago Bears has a nasty memory of Harbaugh from his playing days in the Windy City. It was a game against Minnesota in 1992 during which "Captain Comeback" literally stole defeat from the jaws of victory.

Harbaugh was quarterback with his Bears maintaining a 20-0 lead late in the game. Ditka called a run play, but his genius QB audibled to a pass that was intercepted for a pick-six by the Vikings. Chicago went on to lose that game, 21-20, drawing a memorable quote from Ditka about his free-lancing passer:

“I’ll just say this: ‘If it happens again, there will be changes made and they will be definite and they will be permanent.’ I’m not going to put 47 players’ futures in the hands of one player who thinks he knows more than I do.” 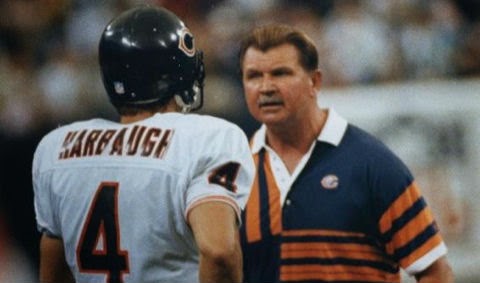 ---------
Tweet ****** Click on NO COMMENTS (or # comments) below to enter and view reader comments.   ----- Remember to check Spartan Headline links, updated real time, in the left column of SpartanResource.com (Web version only). *****Note: If you are receiving this post via automated email, you need to go to the site to view headline links and embedded videos in this post: http://spartanresource.com/ (Web version only). SIGN UP TO RECEIVE POSTS VIA EMAIL, TWITTER OR FACEBOOK IN THE RIGHT COLUMN.*****
Post author: American Reporter at 11:00 AM