WE TOLD YOU DAVID BRANDON WAS A "chUMp"

What a difference a year makes. It was just about this same time in 2013 when University of Michigan Athletic Director David Brandon was riding high in the saddle, sending planes all over the state to emblazon his "Go Blue" message in the bright autumn skies. Including right near Spartan Stadium. On a day UM was playing in Ann Arbor. And barely winning.

But only yesterday, more than 10,000 people signed an online petition to have him removed from office. Then last night, somewhere between several hundred and a couple of thousand rallied on campus to chant against him, culminating in a march to the house of the newly appointed University President, taking their message right to the top of the wolverine food chain. Welcome to Michigan, Mr. Schlissel!

So what happened to bring on the public impeachment? (Besides losing most of their football games since then.) Not so much, really, just David Brandon being who he is. And we told you last year that he was a chUMp of epic proportions.

We awarded Brandon with the "chUMp-of-the-month" title in September 2013, largely for the sky-writing stunt. Then he won the "chUMp-of-the-year" award for his total body of work last year. And he got the monthly distinction again for his failures in January of this year to do anything to correct the nonsense going on all around him. He is a very highly-decorated chUMp.

Perhaps we should call him DAVID BRAND-ON, as he has directed more focus to "branding", "marketing", "advertising", "product labeling", and "selling" than Nike did in the 1980's. You'd almost get the idea he's running a Fortune 500 company that sells manufactured items, instead of a college sports program. On second thought, maybe that's why he was hired in the first place.

We've noticed for decades that the University of Michigan acts like they are so different from everybody else who is in the same class. In other words, college sports programs. Most people view their school athletic teams as student-athletes on a team competing against other similar teams. But UM views their "teams" as "products on the field". And they proceed accordingly.

Well, product-loyalty only lasts as long as product-quality in the business world. Okay, maybe a little longer, as people have a tendency to stick to a brand for awhile even if the price goes up or the quality goes down. Hey, isn't that what's happening with Michigan Football?

The UM football "product" started to decline in quality more than a decade ago, with noticeable performance drop-offs during the past seven years. Most fans stuck with the program until the costs of doing so gradually rose to record high levels. From a business standpoint, Michigan Football is now a lower-quality product that costs more than ever. Hence, the petition-drives, the march on campus, and the empty seats on game-day.

So enjoy the mess that David Brandon made, and remember he did so at the bidding of many other (largely invisible) people who view the UM Athletic Department as a business investment first, and a school with students who play sports second. Quite a soap-opera in Ann Arbor these days. 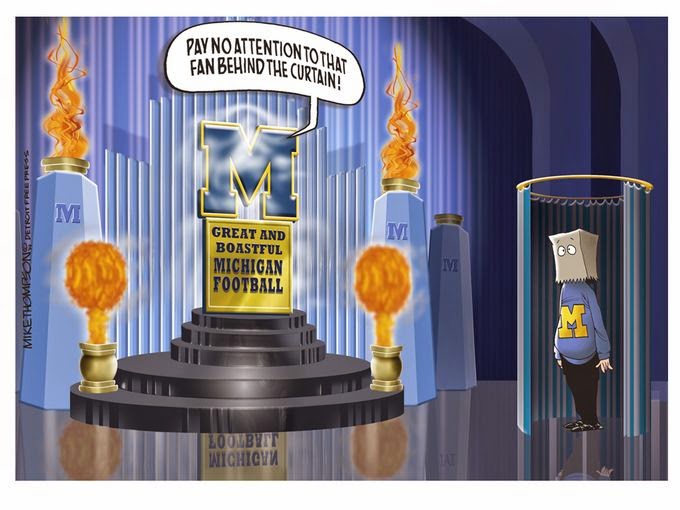 ----------
Tweet ****** Click on NO COMMENTS (or # comments) below to enter and view reader comments. ----- Remember to check Spartan Headline links, updated real time, in the left column of SpartanResource.com (Web version only). *****Note: If you are receiving this post via automated email, you need to go to the site to view headline links and embedded videos in this post: http://spartanresource.com/ (Web version only). SIGN UP TO RECEIVE POSTS VIA EMAIL, TWITTER OR FACEBOOK IN THE RIGHT COLUMN.*****
Post author: American Reporter at 9:58 AM

Email ThisBlogThis!Share to TwitterShare to FacebookShare to Pinterest
Labels: chUMp of the month, chUMp of the year, chUMps, Spartan Man 82