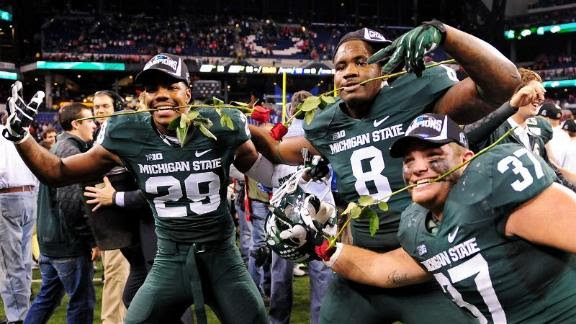 Spartan fans need to stop settling for being just being better than mediocre. It is becoming almost epidemic leading up to this Rose Bowl.  There have been a number of us that just want to “enjoy the moment” of reaching the Rose Bowl or those that believe a 12-1 season with a B1G Championship and Rose Bowl are more important than a basketball National Championship.  How can we as a fan base ask everyone else to change their perception of the Spartan Football Program if we can’t even change our own?

I wrote about this prior to the B1G Championship Game.  If you want the rest of the college football world to give you the benefit of the doubt or to get selected to the more respected bowl, you have to win.  And then go out and win again. And again.

Well we did it.  Not only did we go out with the eyes of college football on us and beat the #2 team in the nation but we did so in an impressive manner.  There are those among us that are content now. They are “enjoying the moment” if you will. Now don’t get me wrong: I am ecstatic with the win over OSU.  Absolutely love it. But I am not content. Heck the season is not even over yet!

The win over OSU is going to mean a lot less if we go and get our heads kicked in by Stanford. And God forbid OSU gets pounded by Clemson too. Suddenly that national perception is knocked back to the Stone Age.

Let’s skip ahead and say we beat Stanford. Does that mean we have arrived?  Everything is all good? In my opinion, there is still work to do.  Iowa won the Orange Bowl in 2009.  The following year Penn State was selected to the Outback Bowl over Iowa, despite Iowa winning the head-to-head battle.  The perception of Iowa remains the same today: a decent program that can put together a magical season every now and again. It takes more than one good season to change the perception of your program.

Those that would take this season (plus a Rose Bowl victory) over a National Title in basketball show why there is a difference between the perception of our basketball program (which is undeniably respected on a national level) and our football program. Look no further than the 2011-2012 basketball season for the proof of this. That year we started off unranked and eventually finished with a share of the B1G regular season, won the B1G Tourney and made it to the Sweet 16.  And yet look at how many of us were disappointed with that outcome because we fell short of the Final Four and ultimately a National Championship.

Now this year the results of the football team are about on par with that basketball season. Unranked to start. Ended up winning the division. Won the B1G Championship. If we beat Stanford we will have some success in the postseason too.  And we are satisfied with that? Are we just that jaded by the success in basketball or are we not demanding enough in football?

Take a second to think about which B1G teams are on that national level that we want to be. Which B1G teams get the respect we want? Ohio State. Wisconsin maybe. U of M’s brand props them up but they have slipped. Same for Nebraska.  And that’s it. But since 1998 when the BCS system was instituted, only Minnesota, Northwestern, Indiana and Michigan State are the only B1G teams to not play in a BCS bowl.  Illinois has made multiple appearances and how do you feel the Illinois program looks nationally?  OSU, Wisconsin, U of M and Nebraska have a ton of appearance and even those 4 have their national perception issues (see OSU getting jumped this year despite not losing).  Being content with just making it to the Rose Bowl and not following up this season with another solid year isn’t going to be enough.

I love the success that we have had this year. It is great to point to 3 of the last 4 years with 11 or more wins.  But at the end of the day, I am still hungry. I still want more.  I want what Bama has because they are disappointed by their one loss season. I want what Texas has where they fire their coach who was one win away from a conference championship because they are not playing for National Championships.  I want the term “magical season” to morph into “that is MSU doing what MSU does.”

Those changes take time but we have another opportunity to make a statement in the Rose Bowl and then again against Oregon early next year. So here we are with a seat at the table. Let’s make some noise instead of just enjoying being here.

Tweet ****** Click on NO COMMENTS (or # comments) below to enter and view reader comments. ----- Remember to check Spartan Headline links, updated real time, at the bottom of the page (Web version only). Note: If you are receiving this post via automated email, you need to go to the site to view headline links and embedded videos in this post: http://spartanresource.com/ (Web version only). SIGN UP TO RECEIVE POSTS VIA EMAIL, TWITTER OR FACEBOOK IN THE RIGHT COLUMN.
Post author: ATownAndDown at 11:48 AM