“ONE”
By: Spartan Dan S.B.
The United States Army prides itself on a mantra of empowering soldiers to become “An Army of One.” In a much smaller parallel, the Michigan State Spartans have embraced a “One Focus” motto. Coach Dantonio consistently refers to his players buying into this team concept working together as “one.” In just a few short weeks, the 2011 college football season will be upon us. But before we excite ourselves with this year’s Spartans, let’s explore last year’s championship season. 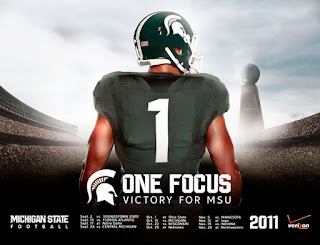 The Spartans had an impressive run, claiming their first Big Ten title since 1990. But along their road to Number “One” in the Big Ten, there were several “One” Moment(s)- a type of spark that ignited this team (and Spartan nation) to take victory from the jaws of defeat. Let’s take a look at a few examples.
First let’s start with Notre Dame. It’s hard not to...
(Continue by clicking the jump break below)
...look at this game without feeling giddy inside. But before we boast about “Little Giants,” it’s important to examine the plays that helped them reach this point. This was an offensive assault, with Spartan rushers gaining over 200+ yards. But we can’t discredit, two crucial Notre Dame turnovers inside the red zone. The latter turnover (a Dayne Crist interception) sparked a 94 yard, 7 play drive culminating with a Kirk Cousin TD pass to Keshawn Martin right before halftime. Now, in any rivalry game, many will argue that the first possession of the 2nd half is always crucial. In MSU’s first possession in the 3rd quarter, under the lights at sold-out Spartan Stadium, Edwin Baker sprinted past Irish defenders for a 56 yard TD. Despite another TD run by Le'Veon Bell, Spartan Defense gave up two 70+ yd touchdown drives. After the Irish regained the lead 28-21 on another Dayne Crist TD pass, Spartans drove into Notre Dame territory.
“One” Moment: With 7 minutes remaining on 2nd & 12, Kirk Cousins scrambled right, and channeled his inner childhood backyard football days, motioning his receiver to "go long" and firing a 24 yard strike for a Spartan score by BJ Cunningham.
From that “One” moment, it set up another critical play. In overtime, CB Chris L Rucker stopped Notre Dame on a 3rd & 3, delivering a thunderous hit and forcing them to settle for a field goal. Finally, let’s explore “Little Giants.” We’ve all seen it, but many people never knew that all week in practice, this play was intended for Le'Veon Bell. As a former high school QB, MSU punter Aaron Bates looked off his primary target, he fired a ball in stride to TE Charlie Gantt. A heroic call was made and set a team on a course for destiny.
Now let’s take a look at Wisconsin. There’s no doubt that this was another exciting win for a Spartan team without Coach D. But they had as much “heart” in this game as any I’ve seen.
“One” Moment: Trailing 10-6 midway through the 2nd quarter, the Spartans forced the Badgers to punt. Returning the kick, Keyshawn Martin splits the coverage up the middle and raced down the right sideline outrunning Wisconsin players for six. This play later set up MSU’s successful 4th & 1 at midfield, with less than a minute, leading to another Spartan TD which capped off a 17 point 2nd qtr. In the 2nd half, Spartan nation witnessed another gutsy call. While leading by just 3 points with under 2 minutes to play, interim Coach Treadwell chose not to kick the FG on a 4th and goal. A play-action pass set up a perfect ball to BJ Cunningham. MSU went on to a double-digit lead to the eventual co-big ten champion Wisconsin, taking a knee on Spartan turf to seal the win.
When looking at Northwestern, this was a game that wasn’t pretty. But it leads me to my main premise about college football: Good teams find ways to win. Period.  Trailing 17-0, Spartan defenders were unable to contain top Big Ten QB Dan Persa in the first half. Another typical 2nd half for Sparty. Kirk Cousins threw for 331 yards and 3 TDs (two of those coming in the final 2 minutes).
“One” Moment: Down 10 points with 13 minutes in the 4th quarter, a fake punt (called “mouse trap”) caught a Wildcat defense taking the “cheese” to a wide-open reception by Bennie Fowler, who also had an end-around TD earlier in the game. On a 4th & 1, with an empty backfield, Cousins set up "the catch"- a tipped ball that seemed to float its way towards a falling BJ Cunningham for a miraculous one-armed grab in the back of the end zone. The TD was an 88 yd drive where Cousins missed 1 throw the entire drive.
After getting the ball back, the proverbial "nail in the coffin" came not by air, but on the ground in the form of a tank-like Edwin Baker treading 25 yards for the score. A late game Eric Gordon interception assured the Spartans their 8th consecutive win. The Spartan Defense was able sack him 8 times which helped lead to 21 points in the 4th quarter.
Purdue was a game where the Spartans had no business winning. MSU was trailing 15 points with only 10 minutes left to play in the game! Following an interception by Chris L. Rucker, MSU scored. Purdue countered with a 52 yard field goal. Determined for victory, MSU rallied back with another score and successful 2-point conversion. With just 5 minutes remaining, down by 3 points, the Spartan defense forced Purdue to punt deep in their own territory.
“One” Moment: On a 4th & 17 on the own 13 yard line, an untouched Denicos Allen blocked the punt giving the Spartans 1st & goal inside the 5 yard line. This play set up a game winning score. In the final minutes, Purdue drove the length of the field, down to the Spartans’ 20 yard line. On a 4th down, defensive deity LB Greg Jones delivered a crushing hit on Purdue’s QB causing a game-ending interception by Chris Norman to close out another Spartan win.
In all of these instances, different players stepped up and made an impact that set forth a chain-reaction that charged this Spartan team to victories of truly electric proportions. Perhaps there’s a reason why words are homophonic-- two words that are pronounced the same, but differ in meaning. Now I’ve realized that is completely true with “ONE” & “WON” (moment). Go green.
Post author: return2glory at 10:41 PM