From the Resource Center at the bottom of this page. M-Live: 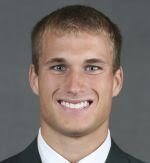 Kirk Cousins
CHICAGO – Michigan State quarterback Kirk Cousins received a nearly one-minute standing ovation for his speech at the annual Big Ten luncheon, and during the ovation coach Mark Dantonio can be seen mouthing the word “special” to new Minnesota coach Jerry Kill.
Cousins, a senior from Holland, was asked by the Big Ten to speak on behalf of all the players Friday. He gave a polished well-written speech of just a little over seven minutes on the subject of the privilege of being a college football player in the Big Ten, and the greater responsibilities he believes comes with it.
Dantonio said before the speech that his quarterback had the makings of a senator, a leader.
“He is a giver, a special person not just a senior quarterback,” he said. “He takes it upon himself to engage his teammates and help them in their lives, not just their football. That's a true leader.”
Cousins said he bases his leadership on the example set by Jesus Christ.
“He was the greatest leader, and he was the ultimate servant leader,” he said. “That's leadership to me. You have to serve people and help them, and then they will believe in you and follow you.”
Post author: return2glory at 2:05 AM