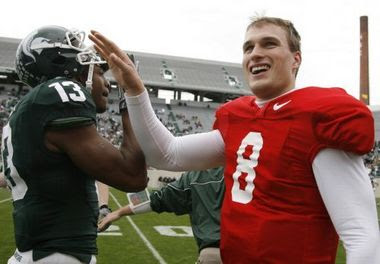 AP PhotoKirk Cousins is a Michigan State captain for a third time.
EAST LANSING -- Quarterback Kirk Cousins, left offensive guard Joel Foreman and free safety Trenton Robinson were elected captains by their teammates Thursday as they finished up the last day of fall camp.
Cousins, a senior, enters his third year as a starter and captain. He is the second MSU player in program history to be named a captain for three years joining Robert Curry, who was a captain of the 1946, '47 and '48 teams.
Foreman, a four-year starter, is a captain for the first time, as is Robinson, who will be... (click read more below)

...starting for the third consecutive year.
The three seniors were key performers and leaders of last year's 11-2 Big Ten co-championship team.
“I'm humbled and honored to be named a captain,” Cousins said. “I'm thankful for my teammates, and I think they made a great selection in selecting Joel and Trenton as well. They were wise, wise decision by my teammates.”
Cousins said leadership was a key to last year's season, and that a fourth captain will be named each week from the team's Unity Council.
“We had so many players last year who were capable of leading, and I think that's the case this year, too,” he said. “I think that will help separate us from the teams we are playing.”
The Spartans have the weekend off, and will begin preparation for the Friday, Sept. 2 season-opening game against Youngstown State in Spartan Stadium.
E-mail Greg Johnson: gjohnson@grpress.com
Post author: return2glory at 10:16 PM