Looks like Jim Harbaugh will let just about anyone into the Michigan locker room. Last week it was some rap artist named "Big Sean". Turns out the Rapper has a criminal record.

Many Michigan folks like to fancy "their school" as being on par with the Ivy League schools, but maybe not Princeton in this case. When Big Sean was invited to perform at Princeton, students led a protest against the rapper, charging him with misogynistic lyrics, and of course, the sex abuse charges from the NYC concert. The student body at Columbia University had similar complaints about Harbaugh's favorite recording artist.

So why was Big Sean "toe-tapping" with the UM players after their rousing win over Rutgers last weekend? Perhaps somebody should ask Jim Minick, the personal attache' for the Wolverine coach, he's the most recent member of Harbaugh's staff to be arrested. Or maybe it was because John Beilein also endorsed the socially-unconscious singer?

All of the pictures below show Big Sean treated like royalty by Harbaugh and Beilein: 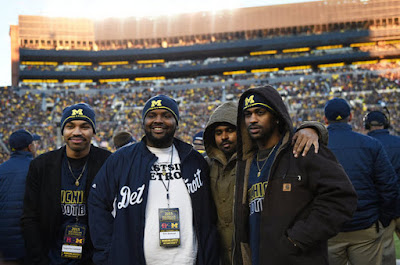 
Tweet ****** Click on NO COMMENTS (or # comments) below to enter and view reader comments.   ----- Remember to check Spartan Headline links, updated real time, in the left column of SpartanResource.com (Web version only). *****Note: If you are receiving this post via automated email, you need to go to the site to view headline links and embedded videos in this post: http://spartanresource.com/ (Web version only). SIGN UP TO RECEIVE POSTS VIA EMAIL, TWITTER OR FACEBOOK IN THE RIGHT COLUMN.*****