Two Key Plays vs. Boise: With photo and video break down...

This post appeared on The Only Colors Blog - by a guest author from Shaw Lane Spartans. I love this stuff.
Be sure to check out the dude in the DUMP the chUMps shirt on the previous post (earlier today).

Hello everyone. My name is Jim and I write over at Shaw Lane Spartans. I, like you, suffer a tremendously enjoyable addiction to Spartan sports, more particularly Spartan football. Chris and I talked over the summer about doing a write-up of key plays from the previous game for The Only Colors this fall. This is the first installment in what should be a twelve, thirteen fourteen part series. Yep, I just predicted a Big Ten title game return in my introductory paragraph.

The story of the Boise State - MSU game has been told by now statistically and in narrative. From here on out I summon my greatest Diet Heck impersonation and breakdown key plays which either directly changed the game or described a playcalling trend which contributed to the outcome of the game. An example of the latter would be breaking down why Nebraska was able to rush 58 times in 2011 and keep the chains moving. While no one play was spectacular there was a general trend of Nebraska cramming the ball down MSU's throat which was awkward and led to the consumption of much beer in a short timeframe.

An example of one play that changed the whole game is this:


How nice that this also happens to be one of our plays today. This play was important because it obviously prevented Boise from scoring a touchdown, but it also contributed to the Key Fact of last Friday evening: MSU held Boise to their first game without an offensive touchdown since 1997.

MSU lines up in their Delta package. Gholston, Calhoun and Marcus Rush are the three down linemen. Allen, Bullough and Norman are your three linebackers. Adams, Dennard, Lewis are your CBs. Jairus Jones and RJ Williamson are your safeties. 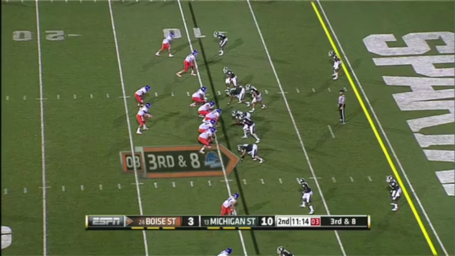 The ball snaps, Rush and Calhoun are across the line of scrimmage before the ball even gets to Southwick's hands. Calhoun is already up out of his stance before the ball has left the center's hand. Perhaps the twitch of Worthy is haunting Calhoun. Allen and Gholston also come on the pressure, but despite this looking like a Pat Narduzzi blitz sandwich it is in fact just a four man rush.

Bullough slides to the right to cover the short curl out of the left slot receiver and/or pass to the flat. Norman plays spy making sure Southwick doesn't get happy feet to the endzone. 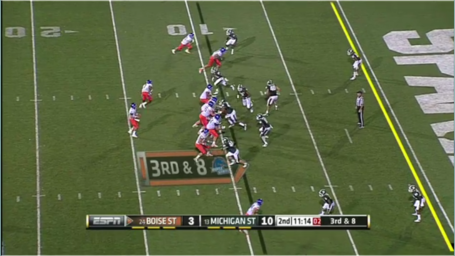 While Calhoun is single-handedly tying up the interior of the Offensive Line Gholston comes through on a stunt. More importantly all of the short and intermediate routes are covered right now except for the slot guy to Southwick's left who he's not really looking for right now. 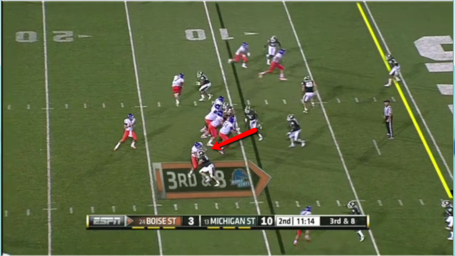 From what I can tell Southwick is targeting number 34 on this play, even though that guy is undoubtedly covered. There's another receiver who's unfortunately offscreen, but he's also offscreen because he's nowhere near where Southwick is rearing back to throw to. Norman knowing it's a pass is making moves to get into the passing lane. 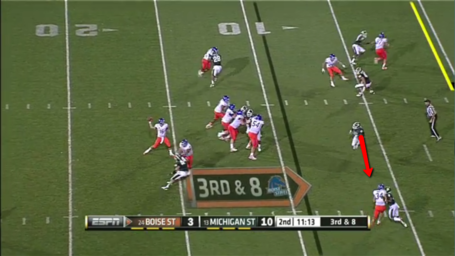 The ball gets tipped by the two(2!) Spartans covering the slot guy on the right. It's hard to tell for certain but if Lewis doesn't tip the ball it looks like it might hit Williamson straight in the chest. Either way this throw appears to be the product of Southwick crapping his pants about the inbound pass rush. No one was even far enough downfield to catch a pass in the endzone yet and any safety valve throw wasn't open yet. 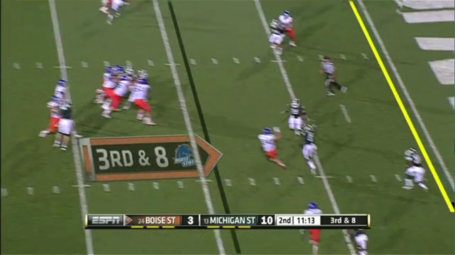 Williamson makes a beautiful grab to keep the ball from hitting the turf. Maybe a little lucky, but certainly a purdy grab. 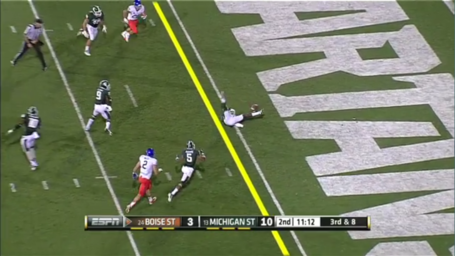 It's the middle of the third quarter and MSU opened the second half by missing a 42 yard field goal at the end of their first drive. Everyone is starting to get that feeling in their bellies, you know the one I'm talking about. Thanks John L, I could have lived a lifetime without knowing that feeling. Anyhow, MSU gets the ball on their own 10 and Le'Veon gets dropped for six yards on first down setting up 2nd and 16. The pass goes incomplete and now it's 3rd and 16. There's only one thing you do on 3rd and 16 inside your own 20, run a screen pass(you just had a pick six on a screen earlier in the game). Run right and hope some things break your way.

And did they ever.


MSU lines up in a 3WR Shotgun, 1 TE set. Bell is to the right of Maxwell. 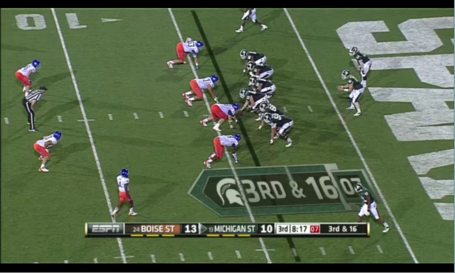 The ball snaps and two things happen. 1.) MSU barely even fakes like they're going to pass. Maxwell brings the ball up just long enough to flashfreeze in the QB position. 2.) LG Jack Allen pulls and takes off for the right side of the line to fill the spot vacated by Fonoti and stop the inbound defensive end. 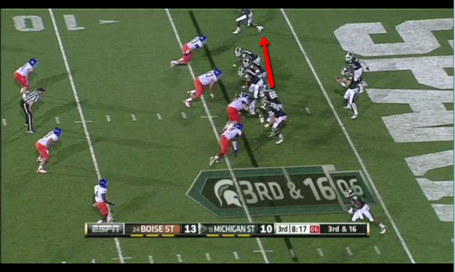 If Maxwell holds on to the ball just a hair longer, Allen has more time to get to the Defensive End before he's in a position to stop the run. 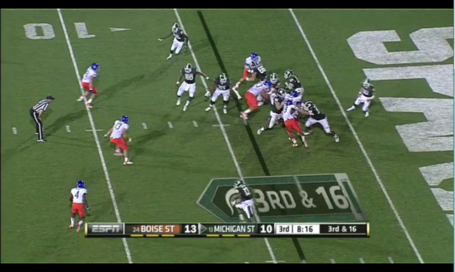 This is the part where Bell should be looking to blow it up through the right side of the chasm of running space that's been created for him at the second level. But Jackson and McDonald are also getting pushed back into the play. 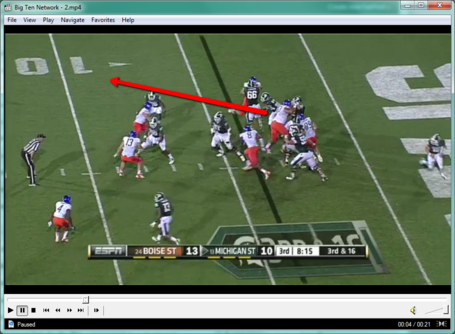 Bell runs into a herd of Broncos and this play is pretty much over. 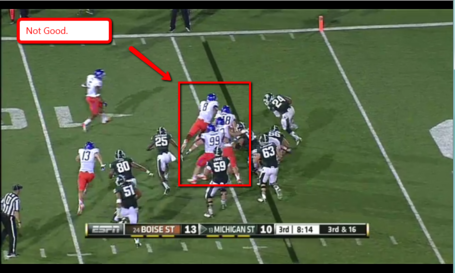 Except that Le'Veon Bell is a man playing a boy's game. And he'd like to remind you of that after hitting his "spin button". In an even more fortunate twist, the entire defense has flowed to the right of the field and Bell's quick spin has unintentionally created a wall of blockers for him to cutback. Bell cuts back and has daylight for about 15 yards. 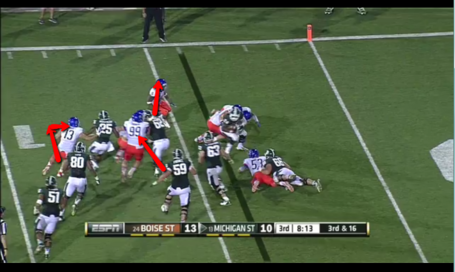 Bell gets downfield and Maxwell throws a block for him. Your QB throwing blocks downfield is always dangerous ground to tread. The meat-eating, beer-drinking football fan in me loves to see the QB dish it out whenever he gets a chance. But if you think our offense is shaky right now a Maxwell-less offense is flat frightening. In this case good on Maxwell for pasting that poor BSU dude out of the play. 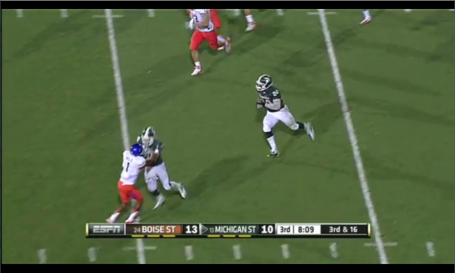 The play ended up going for 35 and the drive ended with a fumble, which like ARRRRGH. But if there was a single play that defined the way Bell put the team on his back. This was it. This play was broken, it's going all-in on a pair of twos and getting twos on the Turn and the River. Somehow, beyond all odds it worked.

- Any other play involving Le'Veon Bell

- The play where the defense sniffed out Boise's intention to run back-to-back trick plays.

- Darqueze Dennard holding up when Boise State sent the house at him late in the fourth quarter.

- The Boise State cheerleader who got up laughing after getting bowled over by two football players. She appears to be completely ok.

Well, that's it for this week. Most weeks I'm going to aim to make this a 3-5 play post. This being the first week though, I had to iron out a number of technical issues like how to handle video and picture capture. (Still looking for suggestions if you guys have any, but I at least have a system in place now.)

Please hit me with suggestions, comments, abuse in the comments. Thanks for reading and we'll do this again next week!

_______________________________
Remember to check Spartan Headline links, updated real time, at the bottom of the page - it's one-stop Spartan info from all of your favorite media sources and blogs. If you are receiving this post via automated email, you need to go to the site to view headline links and embedded videos: http://spartanresource.blogspot.com/
Post author: return2glory at 5:10 PM