Lawrence Thomas Bull Dozer at Full Back - What a Concept!

Last week it was Caper. This week it's the big body...

This use of former 5-star linebacker recruit turned defensive end is an example of one of the great attributes of Mark Dantonio - and a much under appreciated part of his skill set. He thinks about of the box. He finds the balance between the necessary conservative approach to being a head coach (staying grounded, as he puts it) and still being somewhat of a "riverboat gambler". The way he uses his players in a balance for the team's best interest and the player's best interest. He doesn't take the simple or easy way and pigeon hole them, which is easy to do with 105 guys on a team. He takes the best/most effective way even if it's more complicated or involves more moving parts or practice demands. This use of Lawrence Thomas is is awesome. I believe it will continue to help attract better and better recruits as the evidence piles up that playing for him is good for skill development and well as life skill development. 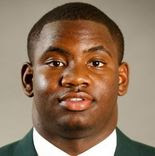 But Saturday marked the redshirt freshman’s noticeable coming-out party, as he appeared at fullback and served on occasion as the lead blocker for Le’Veon Bell and even hauled in 7-yard catch. It’s all part of an experiment by coach Mark Dantonio, who resolved to get the 6-foot-3, 295-pounder on the field in some form.

Thomas, who said he spent some time at fullback in high school, was able to spring Bell for good gains and seemed open to the position change.

"He said as the weeks go on, he’s going to keep throwing stuff at me," Thomas said of Dantonio. 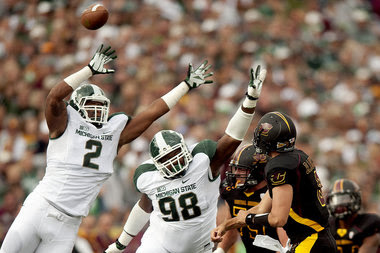 Thomas was involved in an offseason auto accident and missed some time recovering from a concussion in preseason camp while battling for playing time among a stacked defensive end group that Dantonio said does not lack for depth.

Michigan State has Denzel Drone available at defensive end again after switching back from tight end. At fullback, the Spartans use sophomore Niko Palazeti and Thomas as well now.

"Even when he played on the defensive side, he had some pop to him," Bell said. "As a fullback, that’s all it is. You bring your hips, and have some pop to you ... He’ll be a playmaker for us."

Said Dantonio: "You put a 280-pound fullback in there, and he moved some people."

"What we have to do is practice him on both sides. We want him to be a dual player much like Tony Lippett was last year, so he’s not going to go entirely over there on offense. In my big scheme of things, I still think he’s a defensive player down the road, but we’ve got to get him playing football."
___________________________________
Remember to check Spartan Headline links, updated real time, at the bottom of the page - it's one-stop Spartan info from all of your favorite media sources and blogs. If you are receiving this post via automated email, you need to go to the site to view headline links and embedded videos: http://spartanresource.blogspot.com/
Post author: return2glory at 12:02 AM