Posted by C-Mann79 (c/o Return2Glory - I highly recommend reading this account of the Columbus experience through the eyes of a Spartan - my Brother.)


I needed some time after witnessing the closest near shutout of the Buckeyes in the Shoe in 28 years to absorb the entire day.  Did the Spartans defense play that well or is the loss of those five tattoo experts mean that much to the Buckeyes?  More on my answer in a moment but first I have to describe the day.  My 15 year old son was about to attend his first Big Ten game.  Dressed in all of the green we could muster, six different Spartan hats adorning the dash and a green and white bumper sticker stating “Happiness is Crushing Buckeye Nuts” on the rear bumper we made our journey into Columbus.  We made a U turn when we saw
a 5000 square foot Buckeye Corner store in a strip mall and felt they needed to see some Sparty fans.  Even the employees had to grin when they saw my son, Jacob, add our block S flag as a cape as we made our way through all of that scarlet and gray merchandise.
Time to park and tailgate with my Buckeye buddies.  I have seen every game that Sparty has played at the Shoe since 2000 and even one chUMp game.  Scalpers were plentiful so I decided to wait before we made our move on tickets.  The day was gray and misty so I thought they would get cheaper.  My first comment to Jacob as we got out of the car was to be prepared to yell GO WHITE when a fellow fan yelled GO GREEN.  No sooner had I gotten those instructions out at the first intersection we were greeted with high fives and a GO GREEN!  I yelled back GO WHITE and Jacob laughed out loud.  The streets were full of red but it wasn’t long before some green came by.  “Go Green, Go White” reigned the day.  It was awesome.  Three hours later I settled on a pair of $76 seats for $50 each.  Under the overhang in B deck.
Using my knowledge of Buckeye game day, I took Jacob to St. John’s Arena for the Skull Session with the Best Damn Band in the Land.  We heard all of the halftime songs in advance and watched the football team do their walk through the arena.  Then we lined the entrance to the stadium and watched the band and cheerleaders make their entrance.  Time for the game.
On our first punt, the snap is bad and Saldler does an amazing job getting a kick away at all.  I am so used to dodging bullets at the Shoe that I
thought this would be the first of many.  The next possession BJ does what BJ does in the end zone on a broken play.  I never dreamed that it would be our last trip to the end zone.  Our defense is fired up against the freshman QB that has taken over for the 5th year senior who has struggled all year.  He played like a freshman.  Bouncing passes, taking sacks while scrambling to avoid the rush, and most importantly not getting first downs.  It was the next to last play of the 1st quarter before OSU caught a pass for their first first down.
It was obvious early who the better team was that day.  We never got nervous about blowing it though we all knew it was our MO in past games against the Buckeyes.  But our D never let them get close until it was too late.  I was busy watching the offensive/defensive yardage totals after each series knowing where our D stood nationally.  It was awesome to watch the numbers for OSU slowly climb and then drop again as the sacks reached a total of nine.  That final 62 yard drive with the 5th year senior was one third of the Buckeye’s offense for the entire game!
Now for the bad news, Sparty fans.  The eleven starters for the OSU offense were either 18 or 19 years old.  And they played like a high school team out there.  Cousins did have a bad day.  Their corners were bad.  He only threw to the tight ends six times.  Linthicum dropped 2 of 3 catchable balls, Celek caught two, and Dion Sims one.  Sims is first down weapon.  I wish we’d use him.  We won’t beat Nebraska or Iowa going 3 for 14 on 3rd down.   Finally, we were 0 for 1 when we got in the red zone with that pin ball interception to start the fourth quarter.  It was the only time we got closer than the 32 yard line.  That’s bad.  We aren’t going to win many games with Conroy kicking 50 yard field goals.  So I was happy with the result but it sure left me with concern for the upcoming big games.  To get to Indy we’re going to play better than we did Saturday offensively.
Finally, the usher at the Shoe moved us closer to the action as the more than disappointed fans left early in droves.  With five minutes to go there may have been 100 fans between the 20’s!!!  The teams congratulated each other and said a prayer at the center of the field and I told Jacob to get ready.  There were very few green seats in the stadium but it was obvious that the largest section of Spartan fans was just below us.  After the “Amen” the players raced to our section and Jacob and I ran down to greet them.  With helmets raised praising the loyal fans who waited a long time for this win, and a quick version of the fight song, Jacob and I raised the block S flag behind the last row of fans.  This was greeted with personal finger pointing at us by several players recognizing our fandom and it just topped off the day for Jacob’s first Sparty game.  He is 1-0 at the Shoe. 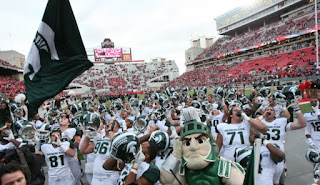