Michigan State's Will Gholston 'dominant' against Ohio State: 'It was so much fun' 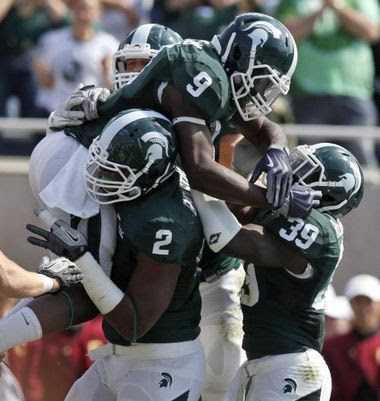 AP PhotoMichigan State's Will Gholston (2) showed some of the reasons he was a five-star recruit out of high school.
EAST LANSING -- Michigan State’s Will Gholston was a high-profile national recruit in 2010 whom the Spartans landed with hopes he would become a dominant player.

The sophomore demonstrated dominance in Saturday’s 10-7 win against Ohio State with five tackles, including three for loss, his first career sack, another sack that was wiped out by an Ohio State penalty and a pass deflection, as the Spartans held the Buckeyes scoreless until the final 10 seconds of the game.


"I thought Will was dominant," Michigan State coach Mark Dantonio said. "It was tough to see from the field all the time, especially when he’s away from you (on the other side of the field), but from what I was hearing from the box, a lot of great plays by Will Gholston."

Gholston said he felt comfortable and fired up at the same time.

"It was like in high school when I could be aggressive and have fun," he said. "It was so much fun."

Gholston, a five-star recruit out of Detroit Southeastern, played in a reserve role last season as a true freshman for
the Spartans in 10 games before a shoulder injury that required surgery. 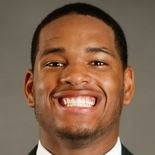 William Gholston
He came back bigger and stronger at 6-foot-7, 280 pounds, and has demonstrated steady improvement this season. He teamed up especially well with freshman defensive end Marcus Rush against Ohio State. Rush was named freshman of the week Monday by the Big Ten after four tackles and his first career sack.

"I’m able to just make plays and be aggressive, we all played aggressive," Gholston said. "Our defense played great. The game plan was perfect. It was fun to just be a part of it. The d-line was great, the linebackers, the d-backs. So many guys were doing things."

Gholston, who acknowledged frustration in not having a sack until Saturday, said he has much more room for improvement.

"Hopefully, I play 10 times better against Michigan," he said.

Gholston and the Spartans have a bye week this weekend before hosting rival Michigan on Oct. 15.

NOTES
-- Just minutes after the win against Ohio State, Michigan State safety Trenton Robinson said his mind had moved on to the Michigan game in two weeks.

"I can’t wait for that game," he said. "That’s all I’m thinking about. We’re going to be ready, and we’re going to know everything they are going to do."

-- Dantonio said he saw improvement Saturday from the offensive line that has been beset by injuries and criticism.

"We protected the quarterback effectively against a great defense. (Ohio State has) a great front seven," he said. (The line) played well. The last time we came down here in ’07, we were unable to run the ball a lick and unable to protect the quarterback. This year, I thought we earned the win."

"Well, let’s see," he said. "There were three Big Ten champions last year and we beat Wisconsin (last year) and we beat Ohio State, so there’s one for you. We can leave it at that."

-- Michigan State’s defense can list some statistical accomplishments from beating Ohio State. The seven points scored by Ohio State ties for the fewest amount scored by a Buckeyes team against Michigan State in series history. The 178 yards of total offense allowed are the fewest for an MSU Big Ten opponent since Northwestern had 151 in 1999. The 35 yards rushing allowed also were the fewest for a Big Ten opponent since Michigan had 28 in 2009.

-- MSU Nike Pro combat uniform retail items were made available on msuspartans.com starting Monday. The Spartans will wear the uniforms in their next game against Michigan.

-- The Big Ten announced the Michigan State-Michigan game will be televised by ESPN and start at noon.﻿