The new York Times studied a variety of measurable factors to determine the number of fans each school carries. For the complete story, click here.

Here is a segment of the article:

Let’s review the results on a conference-by-conference basis with an eye toward realignment. Conferences are listed in order of their aggregate number of fans based on their current configurations.
Big Ten 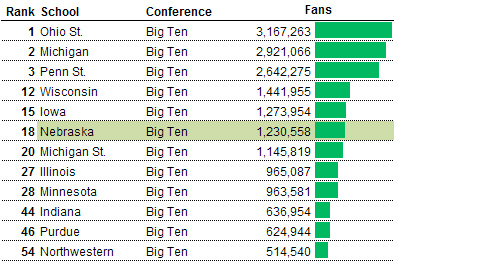 The Big Ten can afford to be picky. Ohio State, Michigan and Penn State are the three most popular college football teams in the country, according to our study. Seven Big Ten teams, including new addition Nebraska, rank in the top 20 nationally. And all but one Big Ten school is in the top 50, the lone exception being Northwestern, which has the Chicago market and strong academics going for it.
The only plausible additions that would allow the Big Ten to improve upon its average of about 1.5 million fans per team are
Notre Dame (2.3 million fans) and Texas (also 2.3 million). But good luck adding those schools.
Missouri, with 1.1 million fans — about as many as Nebraska — wouldn’t be far from the league average. Kansas (0.8 million) would be more of a stretch from a football standpoint but could bring in substantial college basketball revenues.
There’s also long been talk of the Big Ten expanding into the Notheast. But Rutgers (0.9 million fans) and Connecticut (0.6 million) are only middling targets on their own merits because of the relatively low enthusiasm for college football in the region (the same would have gone for Syracuse or Pittsburgh, which just decided to join the A.C.C.).
Then again, we estimate that there are about 0.6 fans of the current Big Ten schools in the New York City market alone, so a lot of people might tune in hoping to see one of these schools lose.
One outside-the-box target: Virginia Tech. In addition to its natural (and quite avid) fan base in western Virginia, it also has some reach into Washington, D.C. and other relatively populous markets — enough for it to rank 13th in the country with 1.3 million fans.
S.E.C. 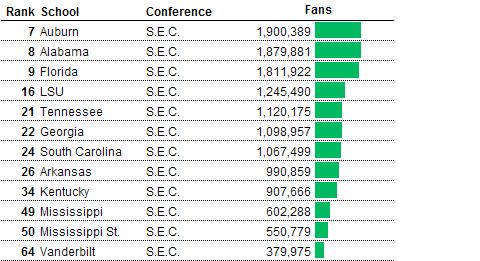 The S.E.C. has few large media markets — Atlanta’s Georgia Tech is in the A.C.C., as is the University of Miami. But if it adds Texas A&M, it will be up to 15.6 million fans total, just barely behind the Big Ten (17.5 million). The enthusiasm for college football in the Southeast and a lot of mid-sized markets with decent population growth adds up to a very valuable brand — as, of course, does the exceptional quality of the product on the field.