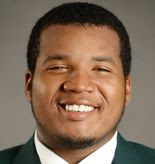 Arthur Ray Jr.
EAST LANSING -- Arthur Ray Jr. and his comeback from bone cancer continued with a symbolic moment when he started Michigan States’ season-opening game and played the first offensive play for the Spartans on Friday night.

He started in place of team captain and four-year starter at left guard, Joel Foreman. Ray played the one play against Youngstown State, and then returned to the sidelines.

"The way that all transpired is Joel Foreman came to me and asked if we could do that," coach Mark Dantonio said. "It was a selfless act by Joel Foreman that’s the beautiful thing there. So, I want to make sure our players understood that. It wasn’t Mark Dantonio being a nice guy. It was Joel Foreman being selfless."

Ray, a 6-foot-2, 297-pound offensive tackle, was a part of the 2007 recruiting class for then-new coach Mark Dantonio.
He practiced in spring practice in April for the first time as a Spartan after a long battle with bone cancer, complications and infections.

He is a fourth-year senior in eligibility, and has been an inspiration to his teammates and coaches, though he has missed some practice this fall with soreness in his leg.

"A lot of emotions, a lot of different emotions," Ray said of walking on the field to play." I have been waiting for this moment for so long. It was a great feeling."

Ray was a promising offensive line prospect from Chicago’s Mount Carmel High School when he signed with the Spartans. That was in February 2007, but by the time high school graduation came, a bump near his shin had been diagnosed as cancer.

He returned to school in 2008, though, and promised the team he would play again. Last fall, he hung around practice without crutches. By January, he was cleared to work out. In March, doctors cleared him to play.

"I found out at pregame meal," Ray said. "Coach D told me to stand up and told me in front of the guys. I was ecstatic."

Ray said it is just the beginning.

"Everybody’s else’s expectations for Arthur Ray have never been mine," he said. "It means stepping back on that field, proving everyone wrong. A lot of people thought I couldn’t get to this point. I am ready to keep going."
Lights go out
Two large light banks were brought in for the 10th night game in Michigan State history, and one went out briefly with 2:20 remianing in first half. After a short delay, the game continued with one bank of lights until the other was restored before the half ended.

Spartans honor Bubba Smith
Michigan State players had No. 95 decals on the back of their helmets, and will wear them for two more games in honor of former star Charles "Bubba" Smith, who died Aug. 3 at 66.

Smith is one of three Spartans to have their number retired.

The third game is against Notre Dame. Smith’s final game for Michigan State was the famous 1966 "Game of the Century" between No. 1 Notre Dame and No. 2 MSU. It ended in a 10-10 tie.

Sontagg selected as captain
Brad Sontagg, a senior wide receiver and holder for placekicking, was selected by the team’s unity council as the game’s fourth captain. The former walk-on served with elected captains Kirk Cousins, Joel Foreman and Trenton Robinson.