Of all the talented skill players Michigan State signed Feb. 1, quite possibly the team's best addition doesn't come from the high school ranks. Michigan State picked up a transfer prize in wide receiver DeAnthony Arnett, who joined the Spartans after a year at Tennessee. Arnett, a Saginaw, Mich., native, made the move in January to be closer to his ailing father. An ESPNU 150 prospect in 2011, Arnett passed up the chance to stay home and went to Knoxville, where he caught 24 passes for 242 yards and two touchdowns as a true freshman last season.

He'll continue his career in East Lansing, where the Spartans could use him right away after losing their top three receivers (B.J. Cunningham, Keshawn Martin and Keith Nichol) from 2011. The 6-foot, 170-pound Arnett is applying for an NCAA waiver that would make him eligible to play immediately rather than sitting out a year.

ESPN.com caught up with Arnett on Monday. Here are his thoughts:
What has it been like so far being at Michigan State?

DeAnthony Arnett: It's just been exciting. I'm just happy to be here, happy to be close to home and able to see my family on the weekends.

That was the big reason why you came back. What has that been like, being a lot closer? 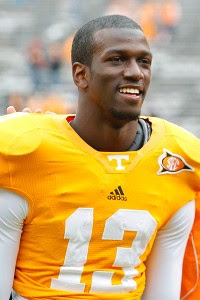 Cal Sport Media via AP ImagesDeAnthony Arnett transferred to Michigan State in January so that he could be closer to his ill father.
DA: Of course it's more responsibility being back at home. I'm just trying to take care of business and hope that everything works itself out. I'm calling a lot to check and see if anything is wrong. And I go home on weekends whenever I need to. Being an hour away is really different than being nine hours away.

How have your new teammates received you at Michigan State?

DA: Just like I'm their brother, like I had came in with the class last year. They definitely accepted me like I was already here. It wasn't one of those, 'Oh, you should have came here the first time.' They all respected my decision when I went to Tennessee, but they've accepted me pretty well.

How many of the guys did you know from before, whether it was playing against them or in the recruiting process?

DA: So many. There's too many to name. It's definitely a lot.

Why did you pick Michigan State?

DA: It's closest to home, to start. And being able to get a chance to study them and watch them, Kirk [Cousins] developed a great relationship with the three wide receivers. They're gone now, and us receivers who are here now, we have a chance to bond and build our own reputation.

How do you see yourself fitting into the offense at Michigan State?

DA: It's pro-style, and I can pretty much fit in anywhere. I'm just anxious to play. I definitely saw myself fitting in, being here, knowing that they throw the ball a lot and get the ball to their playmakers and let them do their thing in space.

How much did you consider transferring to Michigan?

DA: With Michigan, I never got a chance to talk to them, but they got in touch with someone at my school or whatnot. But I knew where I wanted to go. It wasn't a big decision [between Michigan and Michigan State]. I wasn't choosing between those two in the end.

When you went through recruiting the first time, how much did you consider Michigan State and Michigan?

DA: I considered both of them. At that time, it was neck-and-neck with those two, Tennessee, USC and some others. In the end, I chose Tennessee.

Do you know where things stand with the NCAA waiver?

DA: Right now, the university is handling that. I really don't know where it's at. I don't know when it's going to be sent in. We're just handling it, making sure everything is accurate and it's all ready when we send it off. I'm really anxious. I think about it all day, every day, whether I'm going to play or not. If it happens, it happens, and if not, I'll be ready to go next year [2013]. I miss those big moments, especially with Boise State coming in [for the season opener Aug. 31]. I definitely want to be in that game.

You mentioned the three receivers Michigan State loses. How much can you help this team right away if you're allowed to?

DA: I feel like I can come in and fill that void that those three left, stepping up and being a playmaker. It's something I've always done, stepped up to the challenge and have success. Like when Justin Hunter went down during the season at Tennessee, I stepped right in at Florida and did well.

I've been reading some of your tweets. Are you getting some negative responses from fans since you made your decision?

DA: Oh, yeah, you hear it all the time. After this decision, when I chose to go to Michigan State, a lot of Michigan fans would go, 'Oh, they really weren't recruiting him.' It's all fun and games. I'm focused on what I'm focused on and what I'm getting myself mentally prepared for. I'm ready to take on the challenge.

Have you talked with [quarterback] Andrew Maxwell much? Have you worked out with him?

For people who haven't seen you, what type of player is Michigan State getting?

DA: They're getting someone who's a hard worker, dedicated, a team player, has leadership. You're getting pretty much everything, I think.

Are there certain parts of your game that stand out?

DA: Just my quickness, getting open, me being a deep threat, me getting out in space and obviously getting those tough yards on third down. Michigan State's getting that type of player.
Post author: return2glory at 7:49 AM