Sorry I've only been able to highlight stories already out there, but hopefully it helps some of you who may have missed this stuff... {for those who rely on the email posts, remember to visit the actual sight - everyday there are dozens of links to Spartan Stories on popular and obscure websites.} 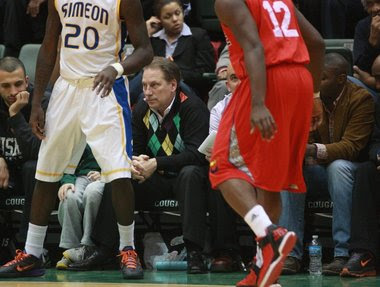 Mostly, though, Izzo was noticeably visible around Brown in Chicago.

Folks who coach and cover hoops in the talent-rich Windy City say Izzo hasn't been back with such persistence until now.

His target: Curie High School sophomore Cliff Alexander, an offensively raw but gifted 6-foot-9, 240-pound five-star prospect, rated No. 9 by Rivals.com in the class of 2014.

"You see how Tom Izzo is recruiting Cliff? He’s putting in the work as a coach," said Reggie Rose, the brother of Chicago Bulls point guard Derrick Rose and the head of Alexander's AAU program, The Derrick Rose All-Stars. "It means a lot. Whose face are you seeing all the time? As a kid, he’s seeing (Izzo's) around.”

Alexander definitely notices. For a while, his Twitter avatar was a picture of him and Izzo together.

Izzo can't speak publicly about Alexander (or any unsigned prospect, for that matter) until he signs a letter of intent, no earlier than November of 2013.

But Alexander learned how Izzo felt about him during their first phone conversation.

"When he told me he loves me," Alexander said.

But Izzo's recruitment of Parker isn't what's being noticed in Chicagoland — it's how present he and his staff are in Alexander's world.

More so than with anyone since Brown?

"From what I've seen thus far," said Butler, who runs Illinois Spot-Lite scouting service. "They haven't targeted too many guys in our state like that.

"And that's a good target to be on, because I think eventually he will be the No. 1 player in our state in his class. ... His upside his enormous."
Post author: return2glory at 11:27 AM