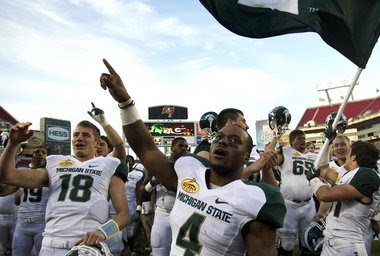 View full sizeAP Photo
Edwin Baker (4) sings the Michigan State fight song with his teammates after Monday's 33-30 overtime win over Georgia in the Outback Bowl. It turns out it was Bakers final game as a Spartan.

Michigan State's Edwin Baker expected to leave for the NFL after this season — any junior running back who publicly sets his sights on a 2,000-yard season isn't thinking about his senior year.

Baker didn't expect to become a Le'Veon Bell's wing man and carry the ball only 170 times for 665 yards. Not after an All-Big Ten sophomore season in which he rushed for 1,201 yards. Not after spring ball, when he proudly said,"I want to gain 2,000 yards and score 20 touchdowns." And not at the beginning of August camp, when he reaffirmed those goals.

Friday, Baker ignored his junior season and kept himself on the track he'd intended to ride all along. The 5-foot-9, 210-pound Highland Park producttold Michigan State coach Mark Dantonio Friday that he'll enter the NFL draft.

"I'm healthy now and I don't want to get injured my senior year," Baker continued. "And I could come back and have a worse year."

He's right on all three accounts.

Whether he's ready or not, the NFL will quickly determine. But he's as ready as he'll ever be. Running back isn't a position like quarterback or offensive line, where another year would bring with it greater physical maturity and a better understanding of the game. Just more hits. And, in Baker's case, barring injury to Bell, probably not all that many more yards, meaning his NFL stock might be about has high as it'll get, wherever that is.

For a can-miss prospect like Baker, an injury would ruin any chance he has.
Baker wasn't facing a Sedrick Irvin scenario, where he was a strong season away from breaking Lorenzo White's rushing records and forever being remembered as a Spartan legend.

It's not that Baker couldn't become a better back with another year at Michigan State. He absolutely could. But it's clear his heart is no longer in college football. A senior year wasn't part of the plan. Never was. So, proceed with the plan.
Post author: return2glory at 9:20 AM