DUMP the chUMps SHIRTS INVADE THE IZZONE ON ESPN! 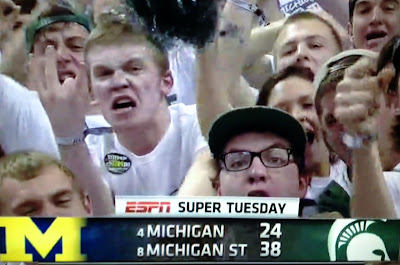 DUMP the chUMps stickers were seen all around Breslin: 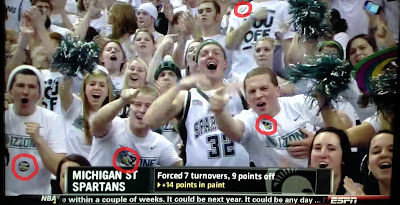 DUMP the chUMps shirts - Now this was interesting. We had 15 shirts in the front row and ESPN just happened to miss them all game long - except for a few "accidents" like the photo below. Am I suggesting they purposely tried to keep the DUMP the chUMps phrase off the TV screen? YES. You see, several years ago Spartanman82 and I wore the No-Michigan shirt (shown in the DUMP the chUMps store) to a MSU vs. Ann Arbor game on ESPN. We were in the front row right by the hand-held camera. The camera operator told us we will never get on TV in those shirts because the people making the decisions on which camera shots get on TV are Michigan grads. When I watched the recording of last Tuesday's game, each sweep of the front row either began just after where our shirts were or stopped just before they were to appear on the screen - or it went right over the heads of the guys wearing the shirts. Also a couple guys wearing the shirts were not on TV at all during the first half, but when they changed to their Izzone shirts in the second half they were on ESPN multiple times. The shots below were pulled from 0.10 - 0.30 second "mistakes" when the shirts got past the censors. The guy below had to raise his shirt up to get it in view of the camera and ESPN immediately changed cameras. The guy to his left (off screen and two people to his right) each had DUMP the chUMps shirts on, but the camera is purposely high as it was all game long. How petty. This is really making me fired up for next year. We will study that tape and will not be denied in 2014. 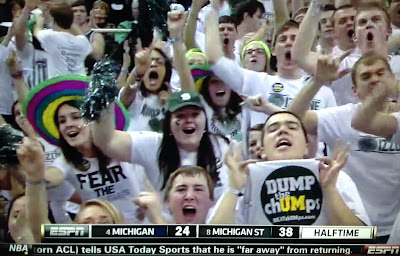 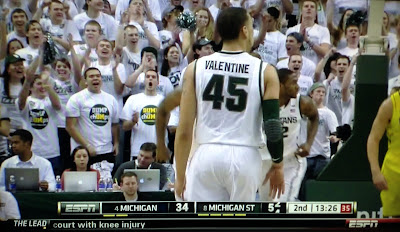 Look where these guys are - with all the camera work on the Izzone, this 0.10 second shot is the only time they show up? All game? No. They show up - but just their faces, but mostly the rows behind them get face time.

(Special thanks to Bucknell Spartan for the donation of stickers - it was awesome and so fun!)

Tweet ------------- Remember to check Spartan Headline links, updated real time, at the bottom of the page - it's one-stop Spartan info from all of your favorite media sources and blogs. If you are receiving this post via automated email, ***you need to go to the site to view headline links and embedded photos and videos in this post: http://spartanresource.blogspot.com/
Post author: return2glory at 11:24 PM