At this point last season the media hounded Mark Dantonio, MSU Players and Spartan Fans with direct questions related to another specific game not involving their own team. Some made out-right recommendations that Dantonio and the MSU family should root for the chUMps in their game against Nebraska because it might help the Spartans down the road IF THE SPARTANS LOST THEIR GAME. They suggested that to not do so shows Spartan insecurity and inferiority.

{Another example of, "This is why we call them chUMps."}

As SpartanMan82 pointed out, the WHOLE concept and questions at that time, for that game were stupid. For that chUMps win to have any impact on MSU's chances to win the division, MSU had to lose a game - or two. They never did lose again for the rest of the season. For those Spartan fans who fell into that poorly disguised trap, what did that chUMps win get the Spartans? Nothing good. It sent MSU to a non-BCS bowl after playing the best team the conference twice, including a razor thin loss in the conference CHAMPIONSHIP game while the chUMps went to the Sugar Bowl against a sub-par opponent after avoiding playing Wisconsin at all. They never stopped bragging about the accomplishment and never stopped belittling MSU's successful season - to this day. You NEVER root for chUMps.

The tables have turned.

WILL chUMps ROOT FOR NEBRASKA IN MSU'S GAME THIS SATURDAY?

Here we are a year later. The Spartans play Nebraska the week after the chUMps lost to the Huskers. The chUMps are now tied with Nebraska for the division lead, but Nebraska holds the edge in the tie breaker by virtue of pounding the chUMps on Saturday. They need help from the Spartans.

I predict that more than one of them, instead will actually suggest that some Spartan fans will root for Nebraska this Saturday in hopes of preventing chUMps from getting to the championship game that MSU earned their way to last year - with no help from the chUMps down the street. Stupid, but true. It will be presented as a real live topic. I know these guys. I live behind enemy lines. It will happen. Let me know if you hear it or read it.

By the way, here is the proper way to handle a scenario in which the Spartans REQUIRE a chUMp victory to win the division a gain a championship game birth:
First, know that how you root does not effect the result of a game.
Second, go rake the leaves. Do not watch the game. This way you are not rooting for the chUMps on a play-by-play basis. That is just sick.
Finally, check the outcome of the game after it is over and celebrate the championship if the Spartans won it and curse the chUMps if they didn't.

By following this process, you can stay true to these basic rules (in this order):
1. Always root for the Spartans (to win a championship or anything else).
2. Never root for the chUMps to win anything.


I DO NOT WANT chUMps ROOTING FOR US IN THIS OR ANY OTHER GAME! 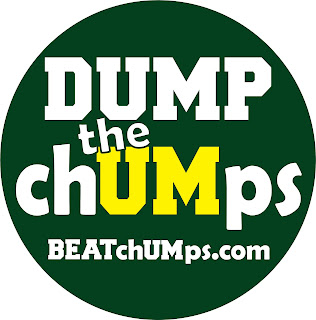 ------------- Remember to check Spartan Headline links, updated real time, at the bottom of the page - it's one-stop Spartan info from all of your favorite media sources and blogs. If you are receiving this post via automated email, you need to go to the site to view headline links and embedded videos: http://spartanresource.blogspot.com/
Post author: return2glory at 9:48 PM