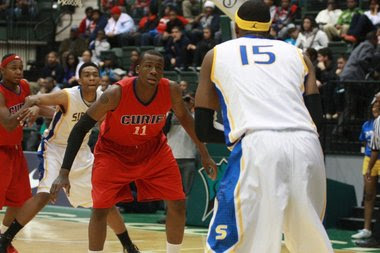 View full sizeCourtesy PhotoCurie sophomore Cliff Alexander (11) defends in the Chicago Public League championship with Simeon star Jabari Parker behind him, all with Michigan State coach Tom Izzo watching. Izzo would like to land both players.
Tom Izzo told Cliff Alexander that he loved him during their first phone conversation.It appears the feeling is mutual. The 6-foot-9 five-star prospect out of Chicago's Curie High School said last weekend he loves Michigan State's basketball coach and, for that matter, Michigan State all together.Alexander, rated No. 8 nationally in the class of 2014 by Rivals.com, was named the most outstanding player atPango's All-American Camp in Long Beach, Calif.Afterward, he was asked about his college choices by Five-Star Basketball.After listing off a litany of scholarship offers, Alexander was asked if he had an early favorite."Michigan State," he replied, without hesitation.How come?"I love Izzo. Izzo's a great guy to be around. I love the coaching staff. I love the practice facility. I love all of it."Alexander's affection for Izzo isn't new. For a while, Alexander's Twitter avatar was a picture of the two of them together.Izzo has long since caught the attention of Chicago's basketball scene with his vigorous recruitment of Alexander.Izzo, of course, would also like to land fellow Chicagoan Jabari Parker. Parker, the nation's top recruit in the class of 2013, plays at Simeon High School, which defeated Alexander's Currie squad in the Public League championship last March.Email Graham Couch at gcouch@mlive.com and follow him on Twitter attwitter.com/Graham_Couch
Related topics: Cliff Alexander, Jabari Parker
Post author: return2glory at 10:57 PM