Coaches Gush About Gholston: "A Beast"

EAST LANSING, Mich. -- Michigan State's William Gholston is so large and seemingly so perfectly suited for defensive end that it's hard to believe he was a linebacker in high school or that he originally wanted to play that position in college.

That is, until Pat Narduzzi flips on the film.

The Spartans' defensive coordinator eagerly pulls up footage of Gholston lined up at linebacker during a recent spring practice. On the first play, the offense goes with a running play to the right side. Gholston, who'd begun the play on the far left side, uses his long strides to gobble up the distance and get in on the tackle.

"Watch this one," Narduzzi says, switching to another practice play.

This time, the offense is in the I-formation, and the handoff goes to tailback Nick Hill on an isolation play up the middle. Gholston shoots through the gap untouched and rams into the fullback, pushing him backward into Hill, who spins around and falls down.

That's about the time you realize Gholston isn't like normal human beings. Though Narduzzi doesn't necessarily plan on using him at linebacker this year, he says that Gholston "can do whatever he wants" on a football field.

"I was feeling it that day," Gholston says of his recent turn at linebacker. "I told them if they ever need a backup Mike [linebacker], I may not be able to cover the slot [receivers] like I used to at 280, but I think I could check some tight ends." 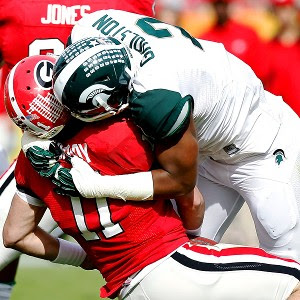 J. Meric/Getty ImagesMichigan State's William Gholston is looking to build off his two-sack performance in the Outback Bowl.
For now, Michigan State is quite happy to have Gholston stay at defensive end, where the junior has a chance to erupt as one of the most dominant forces in the Big Ten, if not the country. That became obvious in the Jan. 2 Outback Bowl against Georgia, when Gholston was nearly unstoppable in recording five tackles for loss and two sacks in the 33-30 overtime win.

His regular season was by no means subpar -- Gholston earned second-team All-Big Ten honors on a defense that finished in the top 5 nationally. Still, he said he went into that bowl game looking to "prove a point to everybody and myself."

The Detroit native is well aware of the immense recruiting hype that accompanied his arrival to East Lansing. He was ranked among the top prospects in the country by every major scouting service and chose the Spartans in a close call over Alabama.

Gholston played in 10 games as a true freshman before needing season-ending shoulder surgery, and he describes his first year of starting last season as "OK, but not as productive as it could have been." So he said he used the practices leading up to the Outback Bowl to focus on finally maximizing his full potential.

"I guess that game showed me what I could do if I put my mind to it," he said.

Penn State defensive tackle Devon Still similarly motivated himself for a huge 2011 Outback Bowl showing, and Still carried that over into last season for an All-America and Big Ten defensive player of the year campaign. Many now forecast Gholston to follow the same kind of upward trajectory and to take over leadership of the Michigan State defensive line withJerel Worthy off to the NFL.

"I feel like I can really do something this year," he said. "I feel a lot more comfortable, and I know the defensive schemes 100 percent. I also know that with the pressure of expectations and everybody expecting me to do well, it opens up stuff for the rest of my team."

Physical ability has never been an issue. Playing with proper technique has. With his power-forward height, Gholston has to constantly remind himself to get his pads low for leverage. He called his burst off the line of scrimmage last year "horrible," and he's been working on improving that this offseason.

"He'll get to the next level," Narduzzi said. "It's just a matter of how good his fundamentals will be when he gets there."

Still, Narduzzi says Gholston never hurts the defense even when he's having an off day because he's so big and strong. And Gholston is one of the few players who can elicit awestruck praise from his teammates.

"Man, that guy is incredible," safety Isaiah Lewis said. "We're on the same side, so I don't always see what he does. But when I do, I'm like, 'Wow, that dude's a ballplayer. He's going far.'"

"This guy is unreal," said right tackle Fou Fonoti, who has to block him in practice every day. "He's literally the best of the best. They don't get any bigger."

Linebackers don't come in Gholston's size, but Michigan State promised him he could try the position when he first got to campus as a freshman. The way head coach Mark Dantonio recalls it, Gholston -- who weighed 232 pounds at the time -- came up to him one day after a few practices and asked if it were all right to take a shot at defensive end during pass skeleton.

Dantonio could hardly suppress a smile. Gholston might be athletic enough to play anywhere, but he's most dangerous where he is now.

"William obviously can be very special," Dantonio said. "As scary as it sounds, he's getting better."
Post author: return2glory at 11:15 AM